sorry for the delayed response (vol3​:​spring) 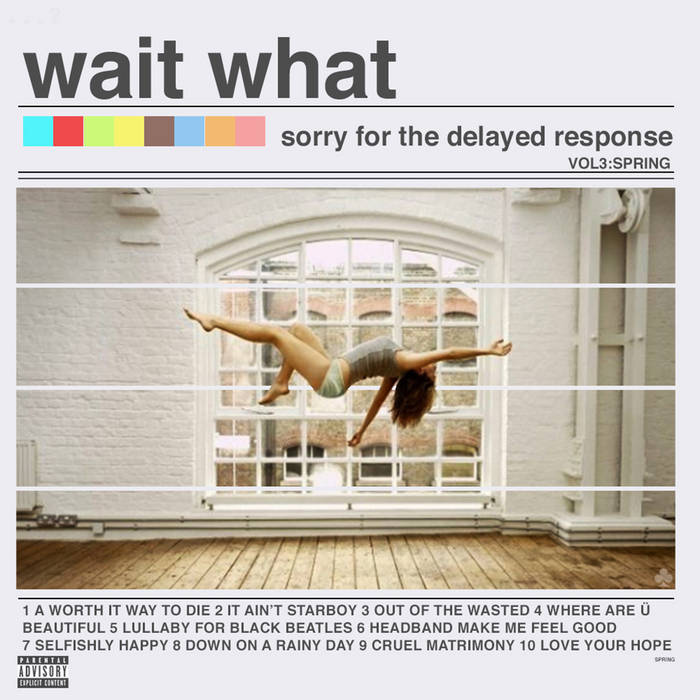 I made this EP in bits and pieces over the last couple years, with the first track in summer ‘14, then a break of about two years while I finished up other projects, and finally completed the most recent songs in feb ’17.

this project is a part of a seasonal series that I started in 2014 with 'we're all busy but good (vol1:fall)' and 'i mean i guess (vol2:winter),' and like those, I had a lot of tracks to choose from to embody the seasonal theme. spring has a fun, high energy vibe to it, and I wanted the EP to follow the feeling of a spring day, from the sunrise to running through the city to a day at the park to wandering around at dusk to finally putting a hoodie on and walking around the city alone on a warm night. I also started running a lot and used these tracks as a running soundtrack, and found myself pairing certain songs with times of day, so was thinking about that progression of a day in putting the tracklist together.

these tracks came together in SF coffee shops -- mercury, stable, four barrel, coffee bar and matching half -- and while I was traveling, over several trips to new york and LA, a few to portland, all over california, miami, austin, hawaii, canada, arizona, new mexico, and mexico (the original one).

‘sorry for the delayed response’ is a funny turn of phrase that must be seeing a 1000x increase in usage since the invention of email. maybe people used to use it in real letters, but with those, I imagine people offloaded the blame to the postal service being slow. I'll use this phrase almost unconsciously, catch myself, and realize how commonplace it's become (maybe the lesson here is I just need to respond to emails sooner). it's kind of a meaningless apology, but feels like it's become a rote mea culpa to acknowledge the unacceptable amount of time that has passed. similar to the other seasonal EPs, I like how it's a turn of phrase that weuse all the time without really thinking about what it's really communicating.

big thanks to a lot of people who listened to tracks, talked about music with, and who I traveled with: David, Zack, Dylan, Shawna, Nate, Ed, Wadams, ST, Ramon, Lockhart, Anna, K, Shane, Nihar, Jesse, Kate, Roger, Dhorn, Rosen, Will and my parents, Ramsay, Alex, Chels & Brandon.